EuroStory 3: From Copenhagen to Madrid

After an eventful first week in Copenhagen that included a day out in Malmo, it was time to pack and leave; the rest of Europe was waiting. Having attended a total of one and a half lectures, we figured we had learnt enough for the next three months. 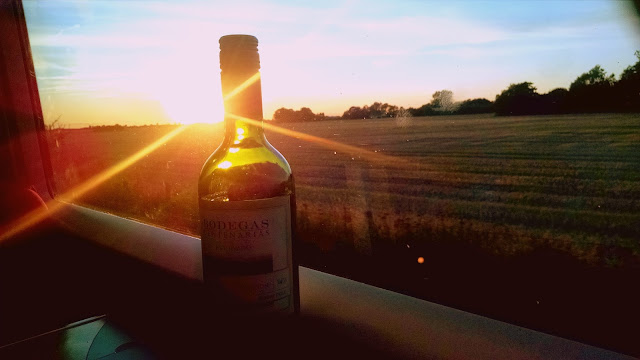 My travel buddy is quite fond of supermarkets, especially before any Eurail journey. She introduced me to all kinds of energy bars, and gave me the idea of picking up a delightfully affordable bottle of wine with bread, cheese and chips. A few hours into the journey, the train stopped and there was an announcement that we all need to empty the train, and go onto the deck. Deck?

As it turns out, the Danish-German border crossing is quite fascinating. The Baltic Sea lies between the two borders, between which a ferry shuttles. The entirety of the train moves onto the ferry, and comes out back on the track when the ferry reaches the other border. And while this happens, the passengers of the train have the fortunate luxury to be on the deck of the ferry. The cherry on top for us was that these 45 minutes coincided with the sunset. It was at this sunset, with a little liquid courage from my wine, that I mustered the guts to talk to another passenger for the first time. My friend was away having a smoke, and there was this girl gazing at the sinking sun alone. To my delight she was interested in books, and narrated bits and pieces about Swedish Fantasy fiction.

We dumped our luggage in Frankfurt and began the herculean task of packing for the next two weeks into the limited space of our backpacks. We were to leave for Spain in Vueling, and had another flight scheduled within Spain with RyanAir, an airline that makes up for its cheap prices by charging a penalty for as much as a sneeze inside the flight. Trust me, a 10 kg limit is far from comfortable, and more so if you’re a guy. Some of the clothes packed by the girls in our group could be folded to a point like a tissue, at which we could only longingly gaze. One of us actually ended up packing a hand towel instead of a normal one, to save space. My own compromise was on the gifts/souvenirs I carried, and I hope others don’t make the same mistake.

Eventually, we all made it through the flight and successfully sidestepped the penalty traps, and we checked into a hostel for the first time in Madrid. There aren’t many moments that stand out from the rest and are firmly imbibed into my memory, for two reasons: One, traveling in a group was not working out for me very well. And two, finding good food was quite a struggle for me, and isn’t good food the cornerstone of a great day? It is for me. Then again, the bright and shining moments of my time in Spain are also credit to my compadres.

Utterly famished, when we walked towards the nearest plaza on our first day in Madrid to fill our stomachs, reality hit me in the face. As my friends comfortably settled into one of the food joints, my vegetarian eyes could only look at the menu, squirm, and walk away. From what I saw, the prominence of meat in Spain is more visible than anywhere else I’ve been too. They all decorate almost every restaurant by hanging a countless carcasses like they’re Christmas lights, and every day is Christmas in Spain. But hey, you gotta eat to live. So after a fruitless exploration of the rest of the plaza, I chose a cozy looking café, and decided to get one of those long-thin bread sandwiches on display, called baguettes, or bocadillos in Spanish. The task turned out to be much harder than I thought, as the barista didn’t speak English.

I always thought that the capital city of a country would be the most metropolitan and hence well versed with English – however this isn’t the case with Madrid, as Barcelona pips it in this regard. Anyway, coming back to the café – I was vehemently shaking my head at every kind of meat she was picking out, and muttering ‘no meat’ ‘no meat’. In the end, a woman from a nearby table took pity on my predicament and offered to translate, and voila – I had a bocadillo with tomatoes and cheese. It wasn’t much, and I couldn’t help thinking – two more weeks of this.

Besides the food, Madrid was beautiful. You can be walking across the narrow twisting and turning roads that are a feature of Spain, and next minute you could be on a highway lined with majestic pristine structures and trees. And the cultural combination of sangria and Flamenco was courtesy of my friends, who made the enquiries and plans around it, and we were all left quite awestruck by the passion and energy radiated by the tap-dancers.
In contrast to the Danish and German folk, the Spanish are a little less bothered about fitness. My own curvilinear paunch is giving me a ‘really, Kishore?’ look, so I’ll explain. It is not an uncommon sight to see an aged woman running through gales and snow in Europe, generally. They could put an average Indian youth to shame on a trek. So at first glance, these Flamenco dancers would appear a bit heavyset. But when the music starts, it’s poetry in motion.

Football was one of the things I was really excited about before going to Spain. If the mere sight of a football stadium gave me goose bumps in Malmo, you can imagine what I was going through on our way to Santiago Bernabeu, home to Real Madrid football club for a stadium tour. From the breathtaking panorama view of the stadium from the top, through the interactive audio-visual halls to the hallowed dressing room of the one and only Cristiano Ronaldo – it was just magical. You cannot help but feel overwhelmed when you realize; this is where the likes of Ronaldo, Zidane and Cristiano have made history. Easily the best 18 euros ever spent. 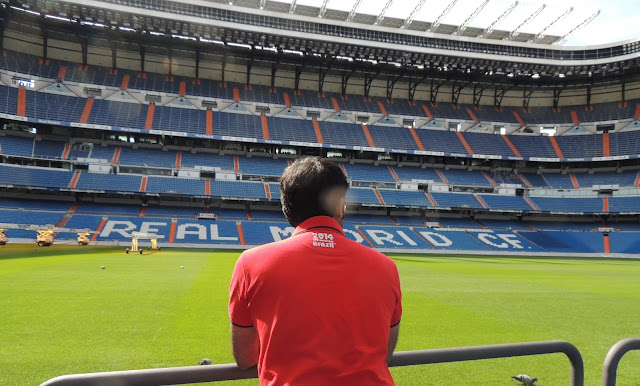 And yet, despite all this, I felt I was missing out on something. Not that my company was intolerable, but it was evident that whatever the group (and for that matter - any group) decides as a whole, I’m not going to be happy about it every time. And there is little room for randomness when you’re traveling in a group, because you have to stick together. Sure you could say that nobody needs to stick together 24x7, and I am always free to do what I want – it isn’t quite so. This is largely because, our time in Spain was completely tied up beforehand. We had to take flights in and out of Spain from Frankfurt, because the trains for the same routes are both long and expensive. And even within these two weeks, we had a RyanAir flight to Ibiza and back to the Spanish mainland, and three of us had tickets to watch a football match in Barcelona.

This tight schedule greatly undermined the mystique Europe held in the near future for me, as I don’t plan that long ahead for anything. So why did I agree to this? I was hit by a whirlwind of tasks together while this part was being planned, and I just agreed to whatever everyone else had decided.
However, I did see a window of opportunity. While the others had Seville as their next stop, I decided to go on my own to Granada for a day, a city couple of hours away from Seville.